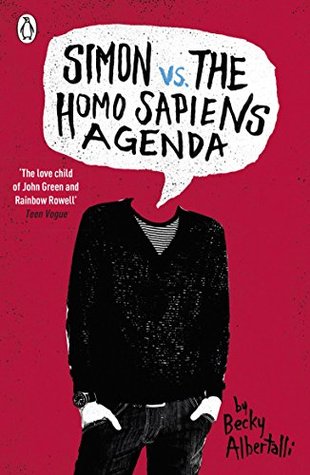 Simon Vs the Homo Sapiens Agenda

Sixteen-year-old and not-so-openly gay Simon Spier prefers to save his drama for the school musical. But when an email falls into the wrong hands, his secret is at risk of being thrust into the spotlight. Now Simon is actually being blackmailed: if he doesn’t play wingman for class clown Martin, his sexual identity will become everyone’s business. Worse, the privacy of Blue, the pen name of the boy he’s been emailing, will be compromised.

With some messy dynamics emerging in his once tight-knit group of friends, and his email correspondence with Blue growing more flirtatious every day, Simon’s junior year has suddenly gotten all kinds of complicated. Now, change-averse Simon has to find a way to step out of his comfort zone before he’s pushed out—without alienating his friends, compromising himself, or fumbling a shot at happiness with the most confusing, adorable guy he’s never met.

FOR THE LOVE OF OREOS, PICK THIS BOOK UP!

This book is just so cute and heart-warming, I completed the whole thing in one day.
Simon, is basically what every nerd wants to be best friends with.
He likes Harry Potter, Star Wars, and is gay.
Although he does not want to come out and make it a big deal, he’s blackmailed by a guy at school, who allegedly has screenshots of Simon’s email conversation with a sort of almost boyfriend, who calls himself Blue.

Simon and Blue get to know each other, without actually knowing who it is in real life. Life is a bitch, and through ups and downs with blackmail, friend-drama, coming out to the world and the suspense surrounding Blue’s real identity, Simon manages to keep up with so much happening all at once, with school work.

So I guessed Blue wrong, but trust me I WAS NOT DISAPPOINTED with who it turned out to be at all. In fact, I felt really happy.

Becky built the characters so well, I almost wished Simon and Blue were real. Sigh.

It was fast paced, cute, funny and well written. Maybe that’s the reason it received such a high rating!

“Why is straight the default? Everyone should have to declare one way or another, and it shouldn’t be this big awkward thing whether you’re straight, gay, bi, or whatever. I’m just saying.”

“The way I feel about him is like a heartbeat — soft and persistent, underlying everything.”

“But I’m tired of coming out. All I ever do is come out. I try not to change, but I keep changing, in all these tiny ways. I get a girlfriend. I have a beer. And every freaking time, I have to reintroduce myself to the universe all over again.”

“He talked about the ocean between people. And how the whole point of everything is to find a shore worth swimming to.”